This weekend’s final round home games are important for so many reasons.

For the first time in 20 years, our Senior Footballers will fight to hold 3rd position on the BFNL ladder, which would  give them the second chance during finals. Lets get behind Luke and the lads. The game kicks off at 220pm.

Our Reserves footballers are also need to win their game against Golden Square to play finals football. Get down and support the Reserves, Tobes, Matty and the lads at 1230.

The U18’s match against Golden Square is the Trent Clahpam memorial game, with a player to be awareded the Trent Clapham memorial award after the game. Trent was an integral part of the Club, and a much loved player before his passing after a courageous battle with cancer. Trent’s mum Fiona and Dad Tim, as well as many family and friends will join us for this special game.

It’s a very exciting  weekend for our netballers with Alisha Turner’s 200th Senior netball game for Kyneton. Alisha is the heart and soul of the netball department and we wish her the best for her milestone game on Saturday. The KFNC is grateful for all the hard work and commitment Alisha has given to the club over 13 years. The A Res netballers are sitting 3rd on the ladder and play 5th placed Golden Square. There game starts at 2pm, get along and support the girls.

The Netballers had a great night with lots of community support for the “This Girl Can” initiative, driven by Vichealth and Mary Ann Thomas MP, who sponsored the event. Vixens star KHAO

WATTS joined the training session on Tuesday night, another free session will be held at the Sports and Aquatic centre on Sunday from 12-2pm.

The Juniors have 6 teams in finals, 4 will play this weekend while 2 teams will have the rest.

The U15 Girls, U16’s and U14Res will all play in a qualifying final, while the 12D’s will fight it out in an Elimination final. All finals are in Bendigo.  Junior presentations will be held in the Social Clubrooms from 930 Saturday morning following a parents v players game. Please take care in the car park as there will be plenty of extra young players about on Saturday.

Our Women’s football team has a well-earned rest after finishing their season in fine form.

Bendigo’s Freshh FM will be broadcasting the match on Saturday from the Kyneton Showgrounds and we have 2 marquees set up for those who purchased them at the 150th Dinner.

Now more than ever we need your support, so come on down to the Showgrounds and get behind the Kyneton Tigers. 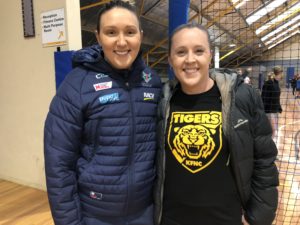